The feature was published in May 2017 to coincide with Mental Health Awareness Week and was entitled:

The Irish News article explains the background and history of this innovative treatment, which offers an alternative to traditional medication and talking therapies.

“HAVE you heard of TMS? It stands for Transcranial Magnetic Stimulation and, according to reports, could offer hope to people with clinical depression when other treatments haven’t helped.

“It was invented in Sheffield the 1980s and has been used to treat a number of mental and physical health conditions, including OCD, anorexia, tinnitus and fibromyalgia – but studies suggest that up to 70 per cent of people with clinical depression could benefit from it.

“Treatments usually centre around talking therapies, such as cognitive behavioural therapy (CBT) and antidepressant medicines. For severe depression that hasn’t improved with other treatments, electroconvulsive therapy (ECT), where an electric current is applied to the brain under general anaesthetic, is still sometimes used. Though generally believed to be effective, ECT is associated with a number of side-effects, including causing seizures and memory loss, as well as being traumatic.

“TMS is a much more acceptable intermediary treatment between medication and ECT,”

“It involves a sea change of how we’ll treat people in the future and the outcomes for depression.” 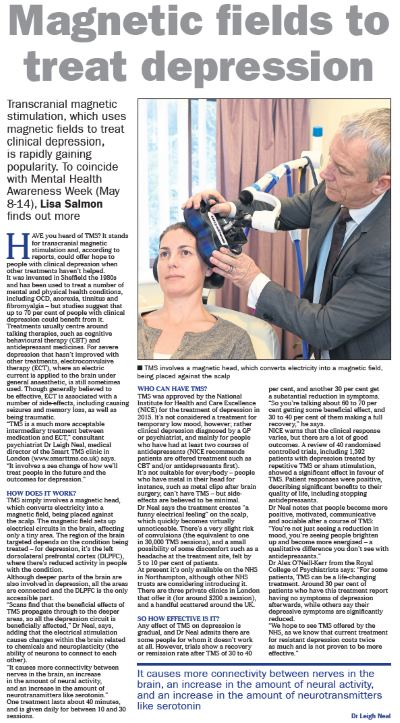 Read feature in full at https://www.irishnews.com/lifestyle/2017/05/10/news/magnetic-stimulation-treatment-can-aid-those-who-suffer-from-depression–1018710/

TMS has not been available in Ireland until recently, leaving patients having to travel to the UK for treatment. But in January 2018, Smart TMS opened their RTMS Dublin Clinic, which offers a range of TMS treatments including:

Yet Transcranial Magnetic Stimulation is becoming more and more popular as a safe and medication-free treatment for mental health conditions. The treatment was recognised by NICE (National Institute for Health and Care Excellence) in 2015 as a safe alternative to antidepressants.