The Irish Sun featured the story of a Wicklow man who had treatment for anxiety and severe depression at Smart TMS in Dublin. He says the TMS treatment (Repetitive Transcranial Magnetic Stimulation) saved his life after a 30 year battle with mental health.

The feature is entitled: 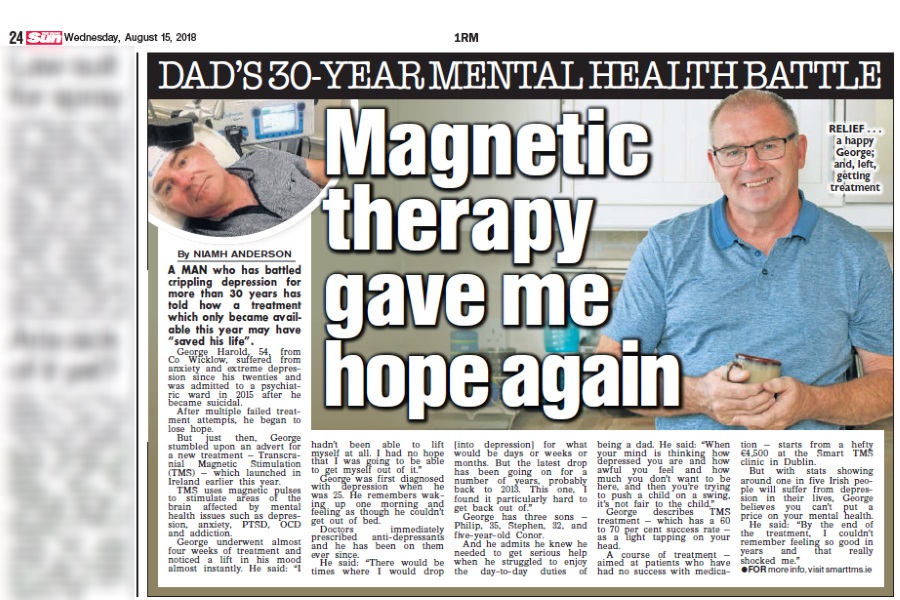 The article introduces the story saying:

“A MAN who has battled crippling depression for more than 30 years has told how a treatment which only became available this year may have ‘saved’ his life.”

Smart TMS patient George Harold from County Wicklow was first diagnosed with depression at the age of 25 and is now aged 54. His 30 year battle with the depression and anxiety saw him become suicidal before being admitted to a psychiatry ward in 2015; yet treatment continued to be unsuccessful.

Despite being on antidepressants, George said:

“There would be times where I would drop [into depression] for what would be days or weeks or months. But the latest drop has been going on for a number of years, probably back to 2013. This one, I found it particularly hard to get back out of.”

Being a father of 3 was motivation to seek help. As the youngest of his children is just 5, he said:

“When your mind is thinking how depressed you are and how awful you feel and how much you don’t want to be here, and then you’re trying to push a child on a swing, it’s not fair to the child.”

Then George learned about a new treatment – Transcranial Magnetic Stimulation – available at Smart TMS in Dublin, which opened in 2017.

George started treatment with daily sessions of magnetic pulses, which work to stimulate areas of the brain associated with depression and anxiety. He describes treatment as a light tapping on his head. As treatment progressed over 4 weeks, George noticed his mood improve. He said:

“I hadn’t been able to lift myself at all. I had no hope that I was going to be able to get myself out of it.”

The Irish Sun article explains that rTMS is a private treatment:

“A course of treatment – aimed at patients who have had no success with medication — starts from a hefty €4,500 at the Smart TMS clinic in Dublin.

“But with stats showing around one in five Irish people will suffer from depression in their lives, George believes you cannot put a price on your mental health.”

George’s final comments would indicate that he agreed:

“By the end of the treatment, I couldn’t remember feeling so good in years and that really shocked me.”

George’s story is also featured in the Irish Sun online with the title:

Read in full at https://www.thesun.ie/fabulous/2983217/wicklow-dad-george-harold-depression-magnetic-therapy/